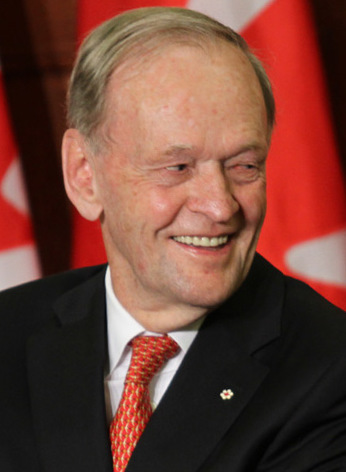 Born and raised in Shawinigan, Quebec, Chrétien is a law graduate from Université Laval. He was first elected to the House of Commons of Canada in 1963. He served in various cabinet posts under Prime Minister Pierre Trudeau, most prominently as minister of justice, minister of finance, and minister of indian affairs and northern development. He also served as deputy prime minister, and secretary of state for external affairs in John Turner's short-lived government. He became leader of the Liberal Party of Canada in 1990, serving as leader of the opposition before leading the party to a majority government in the 1993 federal election. He was reelected with further majorities in 1997 and 2000.

Chrétien was strongly opposed to the Quebec sovereignty movement and supported official bilingualism and multiculturalism. He won a narrow victory as leader of the federalist camp in the 1995 Quebec referendum, and then pioneered the ''Clarity Act'' to avoid ambiguity in future referendum questions. He also advanced the ''Youth Criminal Justice Act'' in Parliament. Although his popularity and that of the Liberal Party were seemingly unchallenged for three consecutive federal elections, he became subject to various political controversies in the later years of his premiership. He was accused of inappropriate behaviour in the sponsorship scandal, although he has consistently denied any wrongdoing. He also became embroiled in a protracted struggle within the Liberal Party against long-time political rival Paul Martin. He resigned as prime minister in December 2003, and left public life altogether in order to spend more time with his grandchildren. In retrospective polling, Chrétien ranks highly among scholars and the public. Provided by Wikipedia
1